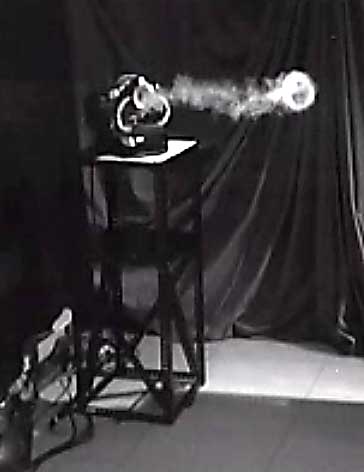 We recently profiled the work of the Yanagida Laboratory of Meijo university, Nagoya, Japan, where work is underway on a vortex ring scent projector to deliver accurately timed odours to participants in a virtual reality (VR) environment. But the projector (one of which is picture at right) had a drawback : “One of the problems is that the user feels as if sudden wind (turbulence) come when the vortex ring hits one’s face.” Now the lab has developed a solution, called SpotScents – see: ‘Pilot study for generating dynamic olfactory field using scent projectors’ which is published in Virtual Reality (VR), 2013 IEEE and describes how not just one, but two scented rings can be made to collide in mid air. Thus stopping the odour plume in its tracks for accurate stationary scent positioning :

“A technique for locally distributing scented air and controlling its direction of movement is proposed. By causing two vortex rings carrying scented air to collide with each other, a local distribution of scent can be achieved in free space. Thus far, however, the behavior of scented air after vortex collision has not been controlled. In this study, we propose a method for varying the moving direction of scented air after the collision by precisely controlling the timing and velocity when expelling vortex rings. We conducted an initial experiment to examine the feasibility of this method and found that direction control of the airflow after vortex collision can be achieved by adjusting the velocity of vortex rings.”

A video showing the machinery in action (unfortunately only in .wmv format) is available here. Much more detail about the entire project is available online here, courtesy the Yanagida Laboratory.