Many so-called “theories of everything” leave out the concepts that are the focus of this study: 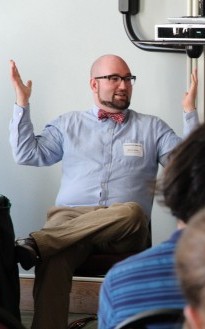 “He is Dead, and He is Continuing to Die: A Feminist Psycho-Semiotic Reflection on Men’s Embodiment of Metaphor in a Toronto Zombie Walk,” Bryce Peake [pictured here], Journal of Contemporary Anthropology, vol. 1, no. 1, 2010. The author, a Ph.D student at the University of Oregon, explains:

“Every October, the dead rise in Toronto; approximately 3,500 to 5,000 individuals take to the street as a unified social body of death through dressing as zombies. In this essay, I explore the affective state of men in the Toronto Zombie Walk from a feminist psycho-semiotic perspective.”

Footnote 8 attempts to clarify a point that some find difficult to grasp intuitively:

“However, to be clear, this yonic imagery embodied by men is not merely a vagina. In the activation of an Eroscentered mythology, Thanatos cannot be embodied unchanged. In this, and adding to the unconscious state and libidinous energy, Eros and Thanatos collapse on one another. The zombie’s “yonic” does not give birth in the production of life, of which the yonic is representative. Rather, it consumes in order to bring death, serving the persistence and advancement of death as a state of being—a painful, bloody death accompanied by eternal moans and screams for release. Thus, the zombie aesthetic of gaping wounds on the face and hands is rather the vagina dentate.”

BONUS: Fourteen minutes of video of the Toronto Zombie Walk in 2010, the year this paper was published: