Kansans have long been at war with each other over the goodness of the flatness of their state. Some are proud, some are not. The University of Kansas has now issued a press release that creates its own controversy, and then claims to settle that controversy. The press release denigrates a paper we (the Annals of Improbable Research) published in 2003 that points out, simply, that Kansas is flatter than a pancake. The university’s press release boasts a headline that is irrelevant to that 2003 finding:

Research: If you think Kansas is the flattest U.S. state, you’re plain wrong 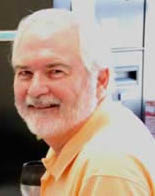 LAWRENCE — It’s time for some levelheaded talk about that ostensibly endless stretch of flatness some denigrate as “flyover country” and others respectfully call “Kansas.” The alleged monotony of the Sunflower State’s terrain is referenced about as often as “The Wizard of Oz” when Kansas pops up into conversation. “It’s truly engrained,” said Jerry Dobson [pictured here], professor of geography at the University of Kansas…

Dobson and Campbell took the measure of 48 states plus the District of Columbia and ranked them for flatness…. And — guess what? Kansas didn’t even crack the top five U.S. states for flatness….

The findings appear in the current issue of the Geographical Review… Dobson hopes the research will help dispel the myth that Kansas is so formidably flat.

The article we published, long ago, to wide acclaim (we even received a phone call from the state of Kansas’s director of tourism, who said he hoped the publicity would cause tourists to come see Kansas), is called “Kansas Is Flatter Than a Pancake“. Authors by Mark Fonstad (now at the University of Oregon), William Pugatch (at the Department of Geography, Texas State University, as was Mark Fonstad when they wrote the article) and Brandon Vogt (then at the Department of Geography, Arizona State University, now at the University of Colorado, Colorado Springs) wrote:

While driving across the American Midwest, it is common to hear travelers remark, “This state is as flat as a pancake.” To the authors, this adage seems to qualitatively capture some characteristic of a topographic geodetic survey. This obvious question “how flat is a pancake” spurned our analytical interest, and we set out to find the ‘flatness’ of both a pancake and one particular state: Kansas….

We purchased a well-cooked pancake from a local restaurant, the International House of Pancakes, and prepared it for analysis by separating a 2-cm wide sample strip that had not had time to desiccate. We collected macro-pancake topography through digital image processing of a pancake image and ruler for scale calibration (see Figure 2)….

The topographic transects of both Kansas and a pancake at millimeter scale are both quite flat, but this first analysis showed that Kansas is clearly flatter (see Figure 4).

(Thanks to investigator Tim Radford for bringing this to our attention.)