For those in the VR (Virtual Reality) world, there’s an old problem, how can scents be reliably delivered to individuals in an audience at the right place and the right time? Although many attempts have been made – with varying degrees of success – it took until 2003 for the vortex ring scent canon to be developed. Research began around 2003 at the Virtual Reality Laboratory (Yanagida Laboratory) of Meijo university,

Nagoya, Japan. Self-rotating doughnut-shaped vortex-rings of scented air, travelling at speed, are projected towards the recipient. At the same time, real-time nose-tracking software in the projector ‘aims’ the scented-air-doughnut directly at the target’s face. Here is a video of prototype devices in action [sadly, only in .wmv format] ‘Projection-Based Olfactory Display with Nose Tracking’ 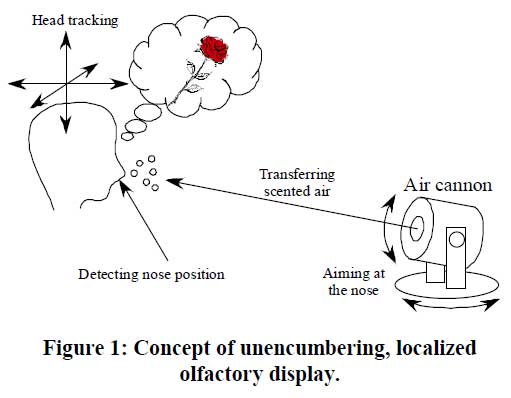 Since 2003, professor Yanagida and colleagues have produced a flurry of papers on the project, e.g.

The approach has a drawback however – in general, participants don’t like the feel of an air vortex ring hitting them in the face – but the lab have recently come up with a possible solution. See details in part 2, coming soon.