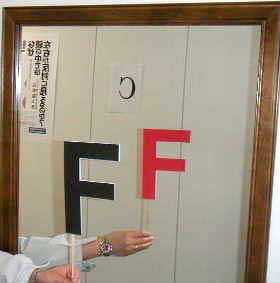 If you’re one of those people who looks into a mirror and wonders – ‘Why is left-right reversed, but not up-down?’ – then you’re not alone.

“No agreed-upon account of mirror reversal is currently available although it has been discussed for more than two thousand years since Plato.”

– explains mirror researcher Yohtaro Takanoa, Professor of Psychology at the Graduate School of Humanities and Sociology, The University of Tokyo, who has been trying to find a consistent explanation for the enigmatic ‘Mirror Reversal’ effect for more than fifteen years. He’s written more than half a dozen scholarly papers on the subject, the latest of which (the source of the quote above), is awaiting publication in the journal Philosophical Psychology : ‘Mirror reversal of slanted objects: A psycho-optic explanation’

“The proposed theory assumes different causes of mirror reversal depending on whether an object’s left-right axis is parallel or perpendicular to a mirror’s surface. This theory was later criticized in that it provided no explanation when the left-right axis is neither parallel nor perpendicular but at an intermediate angle between zero and 90 degrees with a mirror. This article completes the theory by presenting psycho-optic analyses to show that mirror reversal at an intermediate angle can be explained within the same basic framework of the theory.“

Note: The photo above, provided by the professor, shows a mirror view in which the letter ‘C’ (which is stuck to the wall) is reversed, whilst the letter ‘F’ (a hand-held cutout) is not.

Here is a video of the late Professor Feynman sharing his views on the enigma.