To those who compile collections of trivial and spurious words for phobias: here’s a brand new old one to add to the list. 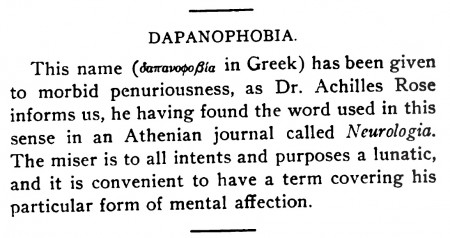 Web searches for “dapanophobia” finds absolutely nothing, except for this one paragraph published in various venues. “δαπανοφοβία” finds nothing either. Maybe if we conjugated the Greek word some other way, we could find some evidence for Dr. Achilles Rose’s assertion that this word was in use. Greek speakers, please let us know.

There are several online-searchable books out there by Dr. Achilles Rose (what a name!), in both English, but none mention dapanophobia. Mostly they are exercises in pedantry, about barbaric English words derived inaccurately from Greek, and doctors’ shameful inability to write good Greek. Then there’s one about carbolic acid, and his most famous book, about the various human disasters of disease and death that accompanied Napoleon’s campaign in Russia.

“δαπανων” means “expenditure” according to Google Translate, so this looks like the right word for a psychological aversion to spending money. But does the world need such a word?