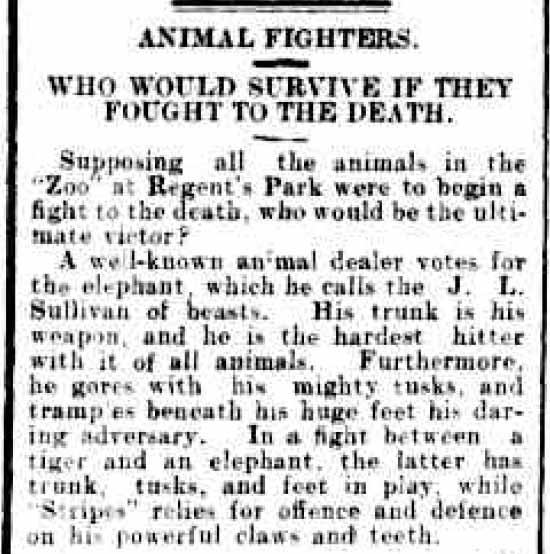 “Supposing all the animals in the ‘Zoo’ at Regent’s Park [London] were to begin a fight to the death, who would be the ultimate victor?” – asked a syndicated item in The Mercury (Hobart, Tasmania) on Wednesday the 16th of January 1901. The article ran through the various fighting attributes of elephants, lions, tigers, deer, bears, snakes, and even kangaroos – which, the authors inform, can hug a dog “… in a fervent embrace that is generally fatal.” But is a kangaroo a match for, say, a giraffe? “The speciality of the giraffe is his enormous reach. He can deliver a nasty punch with his forelegs, and is not above biting his opponent when the opportunity offers.” The last paragraph of the piece proposes a solution to the core question : “ … though each of the beasts has its own specialities in the way of fighting, we have come to the conclusion that either the elephant or the bear would wear the belt in a general fight among the happy family of ‘Regent’s Park.”