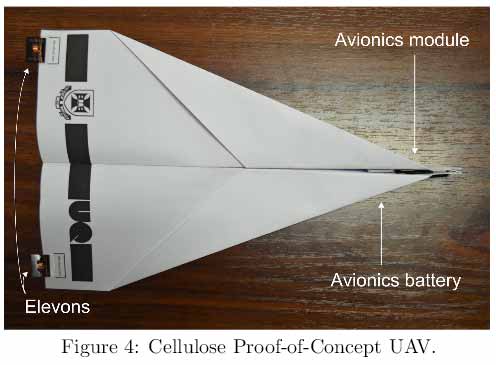 Could “Disposable Folded Cellulose-Substrate Micro-Unmanned Aerial Vehicles” – known to some as paper aeroplanes – be used as disposable, biodegradable monitoring-and-surveillance drones?

A report presented at the Australasian Conference on Robotics and Automation, 3-5 Dec 2012, suggests just that. Researcher Dr. Paul Pounds, at the University of Queensland Australia, explains in his paper : ‘Paper Plane: Towards Disposable Low-Cost Folded Cellulose-Substrate UAVs’

A proof-of-concept “aerogami” prototype was constructed using University of Queensland A4 notepaper [pictured above]. If taken into production, the idea would be to deploy the DLCFCSUAVs in large numbers from aircraft or balloons – but in this case the prototypes were tested by launching them across the lab with an elastic catapult. Reaching glide distances of up to 5 metres (unladen) and 4 metres (laden).

“A simple disposable MAV platform has been developed, based on the venerable paper plane design. The aircraft was capable of stable gliding flight, and is equipped with small onboard voice-coil actuators and onboard 6-DOF inertial measurement for motion control. The proof-of-concept system demonstrated stable gliding flight, and it was shown that the addition of avionic control systems did not compromise gliding performance. Ongoing work aims to regulate aircraft velocity under feedback control, and eventually allow aircraft released at high-altitude to navigate long distances autonomously, with no further input of energy.”

BONUS: The paper provides a free cut-out-and-keep template for you to construct a fully working prototype. [page 9] [battery and electronics not included]