Chemischen und Veterinäruntersuchungsämter (CVUA) in Stuttgart, Germany, issued a report about a recent investigation. Translated (automatically, by Google) into English, it begins:

A curious appeal trial was recently presented to us: consumers had in their “mini Zimties whole wheat flakes” discovered a foreign object and realize upon closer inspection, it is indeed a well-preserved and completely dried bat. On the one hand appalled and aware that this is not this is a Halloween joke and that afford the manufacturer neither hygienic nor any other respect, to disappear in any Vollkornflakes-carton a bat, they delivered the cereal box along with their desirable and undesirable content dutifully from the relevant competent Food Inspection Agency. There it was necessary to determine where and how the animal may have come in the package and whether any further danger ausginge by the operation. For this protocol, and sample was sent to the CVUA Stuttgart. 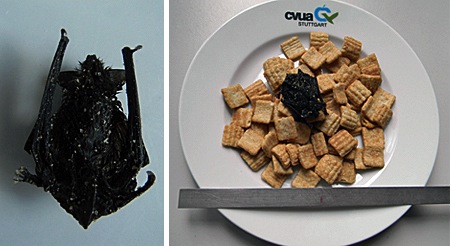 There, the gruesome discovery was confirmed as that which already suspected the complainant: actually a surviving bat had come into the inner bag of the cereal box, which proved the addition found between the square flakes Kotbröckchen bat.

However, the Protocol also brought to light that the package was in high summer August purchased and opened stored for weeks in an open kitchen board….

(Thanks to investigator Kees Moeliker for bringing this to our attention.)