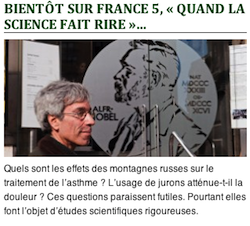 Produced by Frederic Lepage and directed by Roland Portiche for Paris-based FL Concepts, this and subsequent episodes will later also be shown on public television networks in other countries (in other languages). The series features many Ig winners, as well as Marc Abrahams, founder of the Ig Nobel Prize ceremony, and other Iggy persons around the world.

Episode 1 features French, Dutch, Swedish and American Ig Nobel Prize winners in their natural habitats, and an Ig Nobel visit to the Nobel Museum in Stockholm.

The image below shows Basile Audoly and Sebastien Neukirch of the Université Pierre et Marie Curie, in Paris. Audoly and Neukirch shared the 2006 Ig Nobel Physics Prize for their insights into why, when you bend dry spaghetti, it often breaks into more than two pieces. 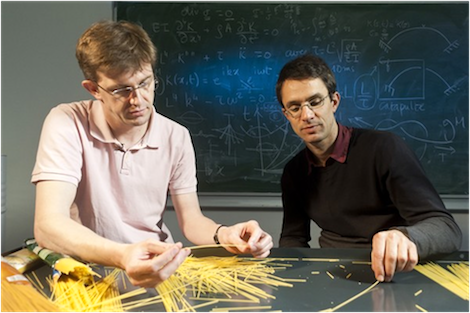