The self-inflicted snake/electroshock saga of patient X [pictured below] turns out, 21 years after it entered the public record, to have an earlier chapter that never, until this moment, made it into print.

That’s patient X, the former US marine who suffered a bite from his pet rattlesnake. Patient X, the man who immediately after the bite insisted that a neighbour attach car spark plug wires to his lip, and that the neighbour rev up the car engine to 3000 rpm, repeatedly, for about five minutes. Patient X, the bloated, blackened, corpse-like individual who subsequently was helicoptered to a hospital, where Dr Richard C Dart and Dr Richard A Gustafson saved his life and took photographs of him. Patient X, who featured in the treatise called Failure of Electric Shock Treatment for Rattlesnake Envenomation, which Dart and Gustafson published in the Annals of Emergency Medicine in 1991, in consequence of which the three men shared the Ig Nobel prize in medicine in 1994….

BONUS: Dr. Gustafson will be coming to this year’s Ig Nobel Ceremony, to take a bow. Two days later, on Saturday, October 22, at the Ig Informal Lectures at MIT, he will give his first public talk about this story. 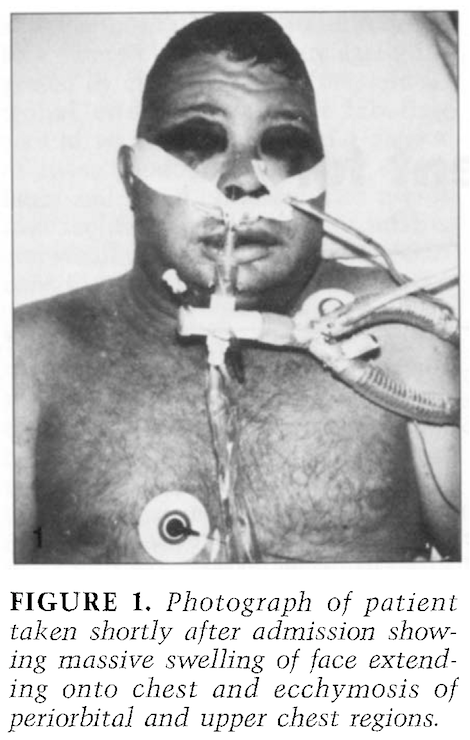