If we recognize people’s faces, much of that recognition comes from seeing their hair. That’s the gist of a discovery made years ago at MIT. These two studies explain, and give examples. The examples are reproduced below. Each shows a set of two people — an American Vice President and President. In one case, Al Gore and Bill Clinton; in the other, Dick Cheney and George W. Bush. Within each pair, you may not immediately realize that both faces have the same features, thanks to some nifty image manipulation. Here are the citations, and a chunk of each study: 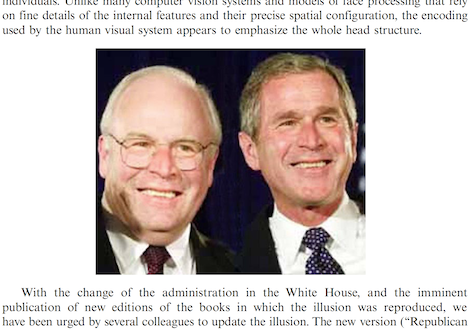