Maggie Koerth-Baker, Boing-Boing’s ace science observer, is doing a series of essays about “My Favorite Museum Exhibit”. The Bishop of Durham’s rectum, on which we have spent an inordinate amount of time and space, because it has a curious back story, is there. (Well, actually, the Bishop’s bottom, what’s left of it, is in the Hunterian Museum, in London. The photo here, from the museum, shows the rectum at its best.)

So, too, is the “Arab Courier Attacked by Lions”, which resides at the Carnegie Museum of Natural History in Pittsburgh. That item reminds us of another of my favorites: Tippoo’s Tiger, at the Victoria and Albert Museum in London.

Tipu’s Tiger is a mechanical toy built for Sultan Tipu (which you’ll sometimes see spelled as Tipoo or Tippoo) of Mysore, India some time in the 1700s. It re-creates a roughly life-size tiger mauling a British military man, with accompanying horrendous noises. The mechanism is old and until recently had long been in disrepair. The museum recruited a highly skilled and appropriately cranky man to repair the mechanism (I once tried to interview him, thus learning about the crankiness).

The museum web site has extensive descriptions of Tipu’s Tiger. These videos, below show the toy, and go into some of the story of the restoration.

BONUS: The book Tipu’s Tigers, by Susan Stronge of the V&A Museum

SPECIAL BONUS: The museum made a Tipu’s Tiger app for the iPhone and iPod touch, which you can download free (and which plays “God Save the Queen” as the tiger mauls the soldier): 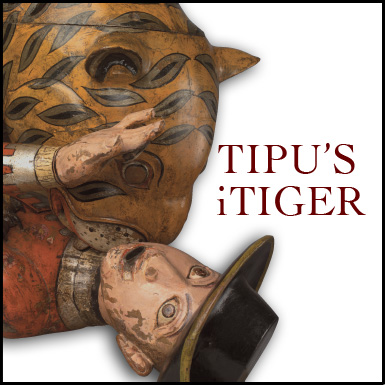