Colltales adventures into the story of color preferences in the insane, jumping off from our excursion in that far-off land:

There are many reasons why the 1931 research “Color Preference in the Insane,” by Dr. Siegfried Katz, was important. At the time, for example, lobotomy was still an accepted treatment for schizophrenia. In fact, the procedure involving cutting nerve fibers from the frontal lobe of the brain, where emotions are generated, would grant the 1949 Nobel Peace prize to Portuguese doctor Egus Moniz.

So kudos to the good doctor Dr. Katz, working at the New York State Psychiatric Hospital, for having chosen alternative ways to make mental patients “less agitated and aggressive”….

They found no “clear-cut relationship between color and psychiatric illness,” and even questioned the use of color in diagnosis. And that was that. For all they cared, those patients who showed preference for some colors over others were, in all likelihood, well, insane.

As for us, color us lazy but never crazy for keeping going back to tap into the Improbable Research site’s bottomless pit of humorous but dead serious scientific tales. Let us praise and thank those enlightened folks and their off-kilter take on things that never cease to tickle us. 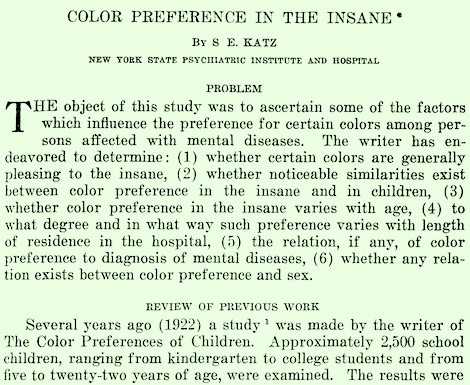