The patent document is written in unusually conversational style. “The history of the snow man or snow woman is unknown. But, I have to say this. Whoever the first person was to think to form snow into a human figure was a genius.” explains inventor Asperas, of Melville, NY, (US). 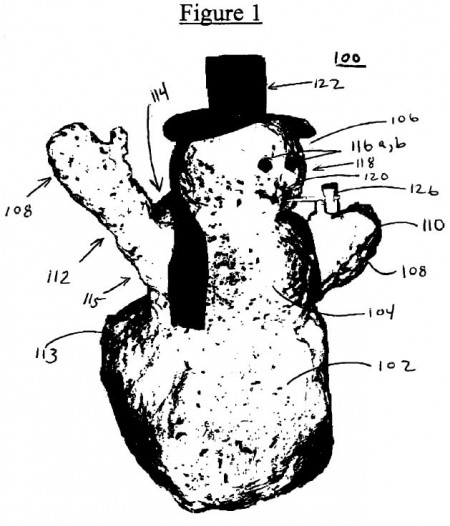 He gives some background :

“Compacted snow is virtually like ice! And you have to lift the darn thing a good four feet. Now this is really back breaking. Not to mention that now you have to put the head on top. All of this is pretty difficult even for an adult (or big kid) like myself.”

“Another thing has always bothered me when I have built snow people. You can never make a perfect snow man. The snow balls are never, and I mean never, perfectly round. They are always lop-sided and look sort of doofy.”

The patent not only provides methods for creating a spherically-shaped body that provides an interior structure of the snow man/woman, but also describes how a generator can provide a sufficient electric charge to attract and adhere snow to the outer surface. And for those who might doubt of the seriousness of such an application, there is a cautionary note:

“The following is not a joke patent. Its completely serious and is a serious undertaking to obtain a patent.”

“It is said that the most ingenius [sic] ideas are the most simple in design. The Wheel. The Toaster oven. And, yes, now the ultimate Snow Man.”

BONUS: The inventor of the wheel, Mr. John Keogh, shared an Ig Nobel Prize, in 2001,with the Australian patent office , because in that year — 2001 — the patent office granted Mr. Keogh a patent for the wheel.