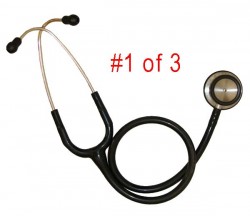 “The stethoscope, and its use in the medical examination, has become iconic of ‘doctors’ and their work.” But why? Dr. Tom Rice, currently a Teaching Fellow at the University of Exeter, UK, has performed an extensive study to find out, and his results are published in the Journal of Material Culture, September 2010 vol. 15 no. 3 287-301 under the title ; ‘The hallmark of a doctor’: the stethoscope and the making of medical identity.
The paper draws on fieldwork which he performed as an Honorary Observer at a major London teaching hospital (St Thomas’) and argues that “ . . . the application of this instrument in a clinical situation allows for a particularly neat enactment of key ‘dispositions’ of what might be described as a doctor ‘habitus’”

Although free access to the paper is reserved for subscribers only, many more details of the fieldwork study are to be found via the UK’s Economic and Social Research Council – which, in 2007, provided a £77,767.45 (c. $128,374) grant for – Stethoscapes: Sound and listening in the sensory economy of a London Hospital. The grant resulted in no less than thirty ‘Outputs’ from Dr. Rice – here’s a sample from  ‘The hallmark of a doctor’ :

“During my fieldwork, the students whose classes I attended were in their first year of ‘clinics’. In preparation for this stage of their training, they had all been asked to purchase their own stethoscopes. I accompanied some of them to the shops where they made these purchases. It was exciting to slide the lid off the box and see the stethoscope stretched out in its foam inlay like a musical instrument. The metallic shine of metal earpieces was slightly hypnotic; the smooth coating of the plastic tubes was pleasing to the touch.”

It seems then that the so-called ‘Death of the Stethoscope’ (brought about by the implementation of new technological processes) may have been greatly exaggerated.

“… the discourse of the ‘death of the stethoscope’ also shows that doctors have come to depend on the stethoscope in order to guard or preserve a particular understanding of what and who a doctor is. In this situation, not only do stethoscopes become agents, but doctors are their patients.”