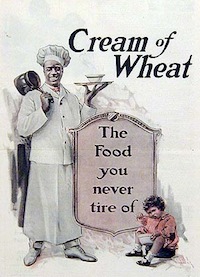 Why do great inventors invent? In “PROCESS FOR PREPARING A COOKED CEREAL AND THE RESULTING PRODUCT“, US patent #3,113,868, granted Dec. 10, 1963, inventor Louis J. Lee makes clear some of his motivation:

The seriousness of this problem can be appreciated when it is realized that in many commercial eating establishments, particularly in cafeterias, it is customary to cook up a large batch of a cooked cereal and to hold it for several hours in a suitable container on a steam table, for example, at the desired serving temperature which is generally near the boiling temperature of water, while removing individual servings from the batch as needed or upon order. Under such conditions loss of particle texture and flavor occurs. Indeed, after several hours on a steam table it is not unusual for a batch of cooked cereal to become a congealed, gelatinous mass. As a result, the batch is unappetizing in appearance and taste and usually is dumped into a garbage can without further ado. Hence, substantial wastage may be involved. A general object of this invention is to solve this problem.