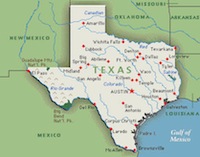 Nearly a third of Texans believe humans and dinosaurs roamed the earth at the same time, and more than half disagree with the theory that humans developed from earlier species of animals, according to the University of Texas/Texas Tribune Poll.

Back in 1996 we obtained similar results. Our series of Scientific Correctness Surveys attempted to decide science questions in the most expedient way: by taking a public opinion survey. The very first of those surveys asked whether dinosaurs and humans walked together. As reported in the January 1997 issue of mini-AIR: