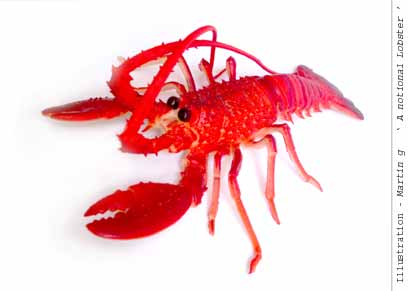 It has been said that: “To consider the lobster throughout history is to contemplate ourselves.” – and a new consideration is  featuring in the latest issue of the journal ‘Gastronomica’ (from University of California Press). The article explains how Salvador Dali used lobster-based imagery as part of his investigation into what he called ‘Critical Paranoia’.
“There is madness in the idea of holding the lobster close to the face as a telephone receiver, its claws to the ear and tail to the mouth” explains the essay’s author Dr. Nancy Frazier.
Dali was clearly interpreting Freudian theory idiosyncratically, but was he trying to be humorous with his ‘Lobstered’ objects? “Perhaps” says Frazier, “Everything he did is open to conjecture (including his erotic musings about Hitler), even after he explained what he meant.”
More may be revealed soon, because Dr. Frazier is currently working on a new book ‘The Voice of the Lobster’ – entirely devoted to all things lobster-esque. Her literary agency’s website explains:

“Lobster is a tasty though messy meal, but if you think that’s all it is, think again. Listen carefully and you will hear the voice of the lobster. This strange creature speaks to us from ancient myth to new wave rock. In our own words and images it tells us who we are. The lobster is our mirror. To consider the lobster throughout history is to contemplate ourselves.“