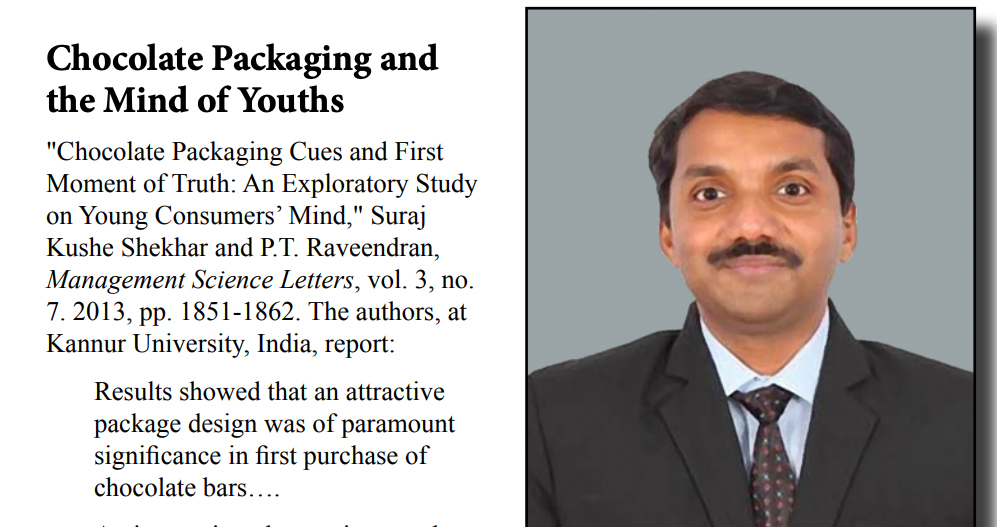 “Chocolate Packaging Cues and First Moment of Truth: An Exploratory Study on Young Consumers’ Mind” [ by Suraj Kushe Shekhar and P.T. Raveendran, published in Management Science Letters, vol. 3, no. 7. 2013, pp. 1851-1862] is a featured study in “Chocolate Packaging Research Review“, which is a featured article in the special Women (and Men) issue of the magazine—Annals of Improbable Research. The study reports:

Results showed that an attractive package design was of paramount significance in first purchase of chocolate bars….

An interesting observation worth noting was, among 72 percent who purchased a newly launched chocolate bar based on an attractive pack, 61 percent regretted having purchased it. These findings clearly portrayed that consumers were misled by good-looking chocolate packages. 8 percent of the consumers also had the opinion that the nutritional information and nutritional claims printed on chocolate packages were misleading. However, this did not prevent them from trying out different brands of chocolate bars….

However, it was concluded that a very strong advertisement with a very attractive pack together could sell the chocolate bar with over 94 percent of the respondents agreeing to it.

96 percent of the students did not follow the storage instructions given on packages.