ProPublica gives a detailed report about a little-noticed consequence of the oil spill that led to an Ig Nobel Chemistry Prize. The ProPublica report begins: 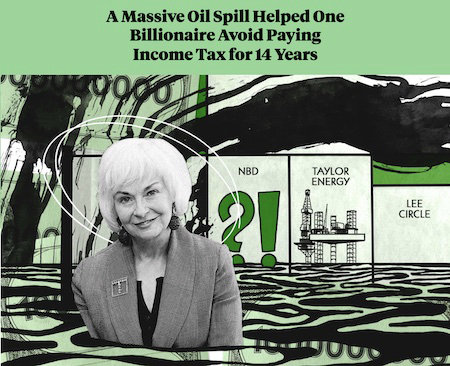 After the Deepwater Horizon offshore drilling rig exploded in 2010, environmentalists surveying the damage in the Gulf of Mexico came upon a mystery. The water had oil slicks that, because of the currents, couldn’t have originated from the site of the notorious accident.

With the help of satellite imagery, they figured out that oil was leaking from a different spill, a six-year-old disaster the public knew almost nothing about. In September 2004, Hurricane Ivan had swept the legs out from under a 40-story oil-drilling platform operated by a company called Taylor Energy, causing a leak that continues to this day. It is the longest-running — and by one estimate, the largest — U.S. oil spill ever recorded, a contentious saga that prompted a recent “60 Minutes” segment.

It’s been an environmental nightmare for the region — but a massive tax bonanza for Phyllis Taylor, the owner of Taylor Energy and the fallen rig….

The 2010 Ig Nobel Chemistry Prize was awarded to Eric Adams of MIT, Scott Socolofsky of Texas A&M University, Stephen Masutani of the University of Hawaii, and BP [British Petroleum], for disproving the old belief that oil and water don’t mix. The achievement is documented in the study “Review of Deep Oil Spill Modeling Activity Supported by the Deep Spill JIP and Offshore Operator’s Committee. Final Report,” Eric Adams and Scott Socolofsky, 2005.