The team (most of it) that won the 2001 Ig Nobel Prize for Ecology—because they analyzed the bacteria dwelling in discarded wads of chewed chewing gum — has now also analyzed life forms that live in various kinds of table salt. Details are in the study: 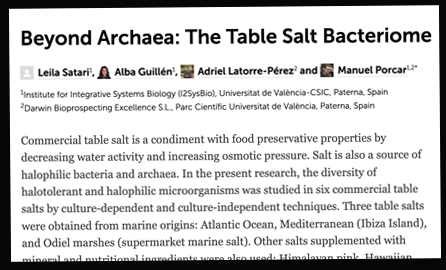 Commercial table salt is a condiment with food preservative properties by decreasing water activity and increasing osmotic pressure. Salt is also a source of halophilic bacteria and archaea. In the present research, the diversity of halotolerant and halophilic microorganisms was studied in six commercial table salts by culture-dependent and culture-independent techniques. Three table salts were obtained from marine origins: Atlantic Ocean, Mediterranean (Ibiza Island), and Odiel marshes (supermarket marine salt). Other salts supplemented with mineral and nutritional ingredients were also used: Himalayan pink, Hawaiian black, and one with dried vegetables known as Viking salt…. A collection of 76 halotolerant and halophilic bacterial and haloarchaeal species was set by culturing on different media with a broad range of salinity and nutrient composition. Comparing the results of 16S rRNA gene metataxonomic and culturomics revealed that culturable bacteria Acinetobacter, Aquibacillus, Bacillus, Brevundimonas, Fictibacillus, Gracilibacillus, Halobacillus, Micrococcus, Oceanobacillus, Salibacterium, Salinibacter, Terribacillus, Thalassobacillus, and also Archaea Haloarcula, Halobacterium, and Halorubrum were identified at least in one sample by both methods. Our results show that salts from marine origins are dominated by Archaea, whereas salts from other sources or salt supplemented with ingredients are dominated by bacteria.