When people first encounter something surprising, it can seem laughable and thought-provoking. Later, if enough people come to decide the discovery is important, people then treat it with reverence and awe. The discovery has become too important, apparently, to describe with amusement. The public reaction has changed—but it’s the same discovery!

Here is , perhaps, a good example, about dung beetles. 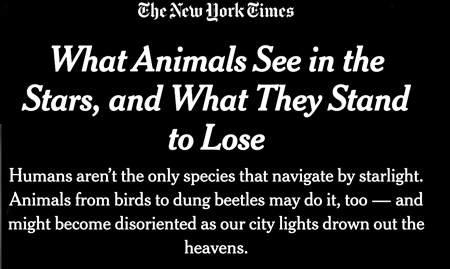 And here’s a short video made by the scientists (thanks to Gwinyai Masukume for bringing it to our attention.):

The 2013 Ig Nobel Prize jointly in Biology and Astronomy was awarded to Marie Dacke, Emily Baird, Marcus Byrne, Clarke Scholtz, and Eric Warrant, for discovering that when dung beetles get lost, they can navigate their way home by looking at the Milky Way.

The team came to that year’s Ig Nobel Prize Ceremony at Harvard University, where they and their discovery were greeted loudly with simultaneous amusement AND appreciation.

One moonless night a little more than a decade ago, Marie Dacke and Eric Warrant, animal vision experts from Lund University in Sweden, made a surprise discovery in South Africa.

The researchers had been watching nocturnal dung beetles, miniature Sisyphuses of the savanna, as they tumbled giant balls of dung. The beetles seemed to be able to roll remarkably straight, even though they had no clear landmarks to reference.

“We thought maybe they were using our cameras, maybe someone had lit a fire somewhere,” Dr. Dacke said. “We were really confused.” Then they realized the beetles were guided by the 100,000 light-years-long streak of the Milky Way.

We humans are famous for this sort of thing.

Science, as it is often taught and described, is a long list of discoveries that at first struck people as being amusing and thus trivial or wrong. Some of those discoveries later came to be seen as important and correct. After that moment (“Hey, this is important!”) each of those discoveries was treated with reverence and awe—but no longer with delighted amusement.