BBC News produced this short documentary about the birth of karaoke. It centers on Daisuke Inoue, the person most often credited with inventing karaoke. (Many other people claim credit, too, and it’s entirely possible that several of them did indeed each independently invent the basics, as happens with many technical innovations!) 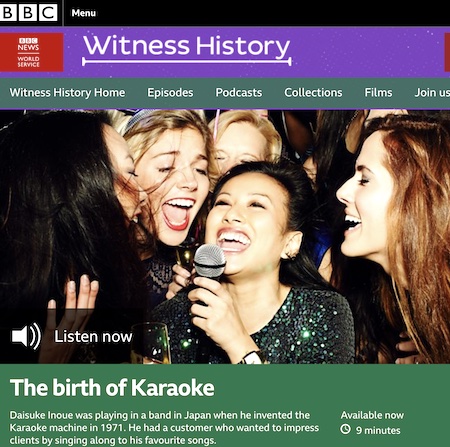 The 2004 Ig Nobel Peace Prize was awarded to Daisuke Inoue “for inventing karaoke, thereby providing an entirely new way for people to learn to tolerate each other”.

The BBC report features a recording of the moment, at the 2004 Ig Nobel Prize ceremony in Harvard University’s Sanders Theatre, when Daisuke Inoue was awarded the prize, and was serenaded by Nobel laureates Dudley Herschbach, William Lipscomb, and Rich Roberts, and by the audience of 1100 giddy spectators. That magical moment begins at the 6:25 point in the BBC recording.