Cheap thrills save lives, some might infer from this new study:

“Sildenafil and Suicide in Sweden,” Ralph Catalano, Sidra Goldman-Mellor, Tim A. Bruckner, and Terry Hartig, European Journal of Epidemiology, epub 2021. (Thanks to Staffan Yngve for bringing this to our attention.)

Here’s a plot of data from the study, which comes with the explanation “Observed (points) and expected (line) suicides among Swedish men aged 50–59 for 120 months beginning January 2005 and ending December 2014 (first 6 months of expected values lost to modeling). Lower than expected sequence of observed suicides marked with ‘X’ “: 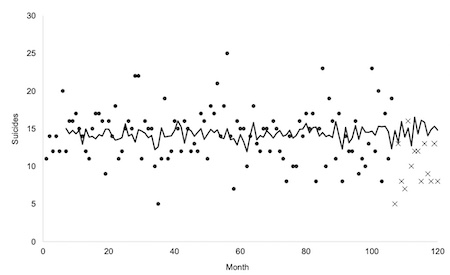 We use an intent-to-treat design, implemented via interrupted time-series methods, to test the hypothesis that the monthly incidence of suicide, a societally important distal measure of mental health in a population, decreased among Swedish men aged 50–59 after July 2013 when patent rights to sildenafil (i.e., Viagra) ceased, prices fell, and its use increased dramatically….

Consistent with the argument that suicides fell below expected values after the introduction of relatively inexpensive sildenafil, the differences between expected and observed values appear increasingly negative in the last 18 months.