“Outside the academy, the paper [“The Role of Auditory Cues in Modulating the Perceived Crispness and Staleness of Potato Chips“] failed to generate any interest until 2008, when its authors were awarded the Ig Nobel Prize for Nutrition. The Ig Nobels are intended to “honor achievements that make people laugh, and then think,” but media coverage of Spence’s win focussed mostly on the former, with headlines that ranged from “boffin gives eaters sound advice” to “why research that?!” At first glance, the “sonic chip” experiment, as Spence fondly refers to it, does seem trivial. In reality, it was an elegant psychological trick, offering insight into the way the brain combines two separate sensory inputs—the crunching sound and the tactile oral sensation of a potato chip—into one multisensory perception. Spence lists the honor at the top of his curriculum vitae.”

—from the report “Accounting for Taste,” by Nicola Twilley, in The New Yorker magazine,  October 26, 2015

Here is some detail from the study: 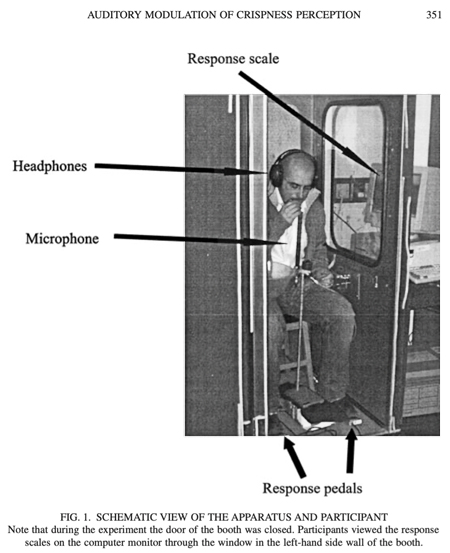