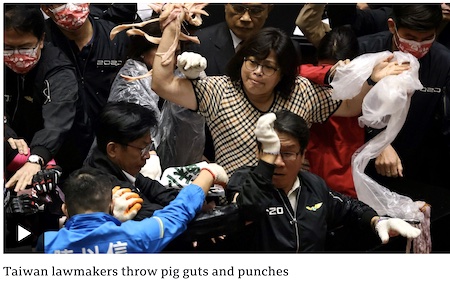 Pig guts were thrown and scuffles broke out in Taiwan’s parliament over the easing of US pork imports.

The government have been criticised for a recent decision to allow pork containing ractopamine in to the country.

The additive ractopamine is currently banned for pig use in Taiwan, as well as in China and the European Union, due to concerns about safety for animals and humans.

The 1995 Ig Nobel Peace Prize was awarded to the Taiwan National Parliament, for demonstrating that politicians gain more by punching, kicking and gouging each other than by waging war against other nations.