Alexander Lukashenko, who has been awarded two Ig Nobel Prizes, announced that he might, perhaps, possibly stop being the president of Belarus, say many news reports. 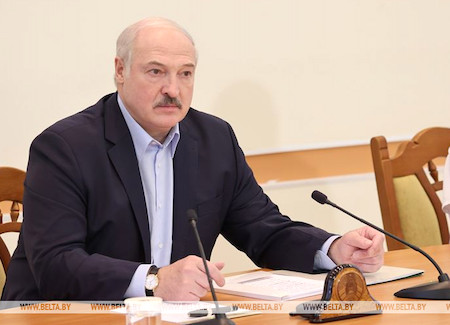 Reuters reports (on November 27, 2020: “Belarusian leader Alexander Lukashenko said on Friday that he would step down as president once a new constitution is adopted and proposed curbing presidential powers as part of the reforms, though he gave no timeline for those moves.”

Lukashenko was a co-winner of the 2020 Ig Nobel Prize for medical education. That prize was awarded to Jair Bolsonaro of Brazil, Boris Johnson of the United Kingdom, Narendra Modi of India, Andrés Manuel López Obrador of Mexico, Alexander Lukashenko of Belarus, Donald Trump of the USA, Recep Tayyip Erdogan of Turkey, Vladimir Putin of Russia, and Gurbanguly Berdimuhamedow of Turkmenistan, for using the Covid-19 viral pandemic to teach the world that politicians can have a more immediate effect on life and death than scientists and doctors can.

This is the second Ig Nobel Prize awarded to Lukashenko. The 2013 Ig Nobel Peace Prize was awarded jointly to Alexander Lukashenko, for making it illegal to applaud in public, AND to the Belarus State Police, for arresting a one-armed man for applauding.