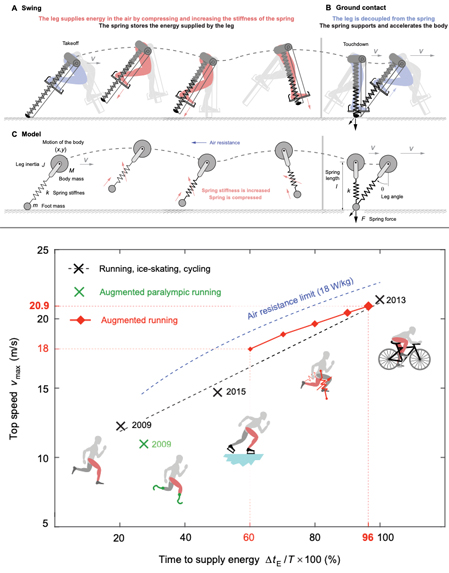 “Humans have attempted to surpass their natural running capability using springs for at least a century… We conceive an unconventional means of running, which could allow the human to maximize top running speed by supplying energy in the air instead of on the ground. This may be achieved by augmenting the human with variable stiffness springs attached to the limbs. In the air, the limbs supply energy by simultaneously compressing and increasing the stiffness of the springs.”

The Spring Shoes of Dr. Nakamats

Dr. Nakamats, the world’s most prolific inventor (more than 3300 patents, and counting), who also has an Ig Nobel Prize (for having photographed every meal he’s consumed during much of his life), famously invented a spring-driven shoe, many years ago. Here’s video of a young man taking a Nakamats-enhanced stroll: