“To smell again, perchance to learn better” would be a poetical way to speak of this study about teaching sleeping children in Germany how to read and write better English:

“How Odor Cues Help to Optimize Learning During Sleep in a Real Life-Setting,” Franziska Neumann, Vitus Oberhauser, and Jürgen Kornmeier, Scientific Reports, vol. 10, no. 1227, 2020. (Thanks to Hans-Stefan Madlung for bringing this to our attention.) 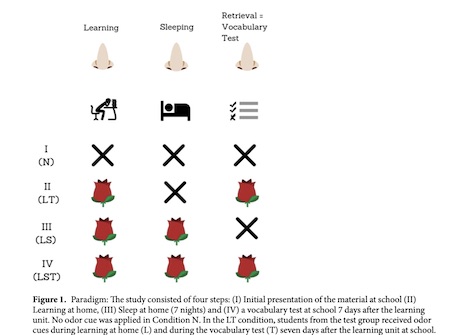 The authors, at the University of Freiburg, Germany, explain:

All sticks were used in an unlit state, as they already distributed a highly intense fragrance as such. Depending on the experimental condition, the students were instructed to put the incense stick next to them on their desk while they were studying the English vocabulary at home, on their nightstand next to their bed while they were sleeping, and/or on their desk during the vocabulary test itself, which took place seven days after the initial presentation of the vocabulary in school. Having the incense stick on the nightstand during the whole night implied that the rose fragrance was supplied during the complete sleep period and in all sleep cycles….

We had to rely on the students’ reports on their use of the odor cues while studying at home and during their sleep in the seven nights between the initial encoding of the vocabulary material and the final test.