“Why do dogs have cold noses?” wonder many humans who, most of them, have warmer noses than dogs have. Here are two research studies by Ronald H.H. Kroger and colleagues, that sniffed into the question and may have found some answers. 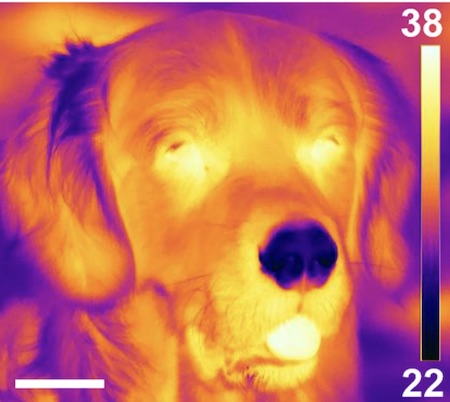 “The dog rhinarium (naked and often moist skin on the nose-tip) is prominent and richly innervated, suggesting a sensory function. Compared to nose-tips of herbivorous artio- and perissodactyla, carnivoran rhinaria are considerably colder. We hypothesized that this coldness makes the dog rhinarium particularly sensitive to radiating heat. We trained three dogs to distinguish between two distant objects based on radiating heat; the neutral object was about ambient temperature, the warm object was about the same surface temperature as a furry mammal. In addition, we employed functional magnetic resonance imaging on 13 awake dogs, comparing the responses to heat stimuli of about the same temperatures as in the behavioural experiment…. Our results demonstrate a hitherto undiscovered sensory modality in a carnivoran species.”

Words to Remember, and Use

We suggest that you memorize that final, stirring phrase from the temperature dynamics paper— and recite the phrase in any meeting you attend, on any subject, when the meeting has reached its moment of maximum dullness: “our results suggest strongly that the cold state is the operating state of the dog rhinarium.”