Humans are more omnivorous than some of us realize, sometimes, suggests this new study:

“There’s a Frog in My Salad! A Review of Online Media Coverage for Wild Vertebrates Found in Prepackaged Produce in the United States,” Daniel F. Hughes, Michelle L. Green, Jonathan K. Warner, and Paul C. Davidson, Science of the Total Environment, vol. 675, July 20, 2019, pp. 1-12. (Thanks to Peter Uetz for bringing this to our attention.) 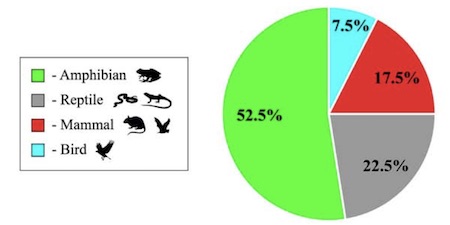 Prepackaged leafy green vegetables represent one of the fastest growing segments of the fresh-produce industry in the United States. Several steps in the production process have been mechanized to meet the downstream demand for prebagged lettuces. The growth in this market, however, has come with drawbacks, and chief among them are consumers ﬁnding wild animals in prepackaged crops…. [We reviewed] online media coverage of wild vertebrates found in prepackaged produce items by customers in the United States…. Most incidents involved amphibians (52.5%) and reptiles (22.5%), while fewer contained mammals (17.5%) and birds (7.5%). Frogs and toads made up all of the amphibian-related incidents, with more than 60% comprising small-bodied treefrogs found in various types of fresh leafy greens. At least seven incidents involved Paciﬁc Treefrogs (Hyliola regilla) and three comprised Green Anoles (Anolis carolinensis). One lizard and nine frogs were found alive, and at least two frogs were released into non-native areas….

We also found numerous instances of invertebrate biodiversity found in prepackaged crops (e.g., a live scorpion found in bagged spinach, and pending a thorough review, these may in fact outnumber the vertebrate cases.