CBS Sunday Morning celebrates the invention of karaoke—and the awarding, in 2004, of the Ig Nobel Peace Prize “for creating an entirely new way for people to tolerate each other”: 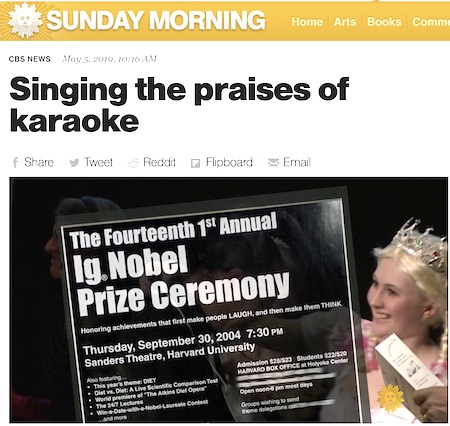 Inventions and Inventors, in Song and History

Karaoke is in many ways an invention of, by, and perhaps for the people. Since the awarding of that prize, in 2004, many people have claimed that they invented karaoke. And perhaps many, or even all of them, are correct. Many inventions have been invented, independently, by numerous people.

One could argue (and some people do argue) that the grandfather of karaoke is none other than Dr. Nakamats, Japan’s (and the world’s) most patent-prolific inventor (with more than 3500 patents, and counting). Dr. Nakamats is himself an Ig Nobel Prize winner. He was awarded the 2005 Ig Nobel Prize for nutrition, for photographing and retrospectively analyzing every meal he has consumed during a period of 34 years (and counting).