Sad news. John Senders has taken his last gleeful spin through the universe. He died this week, just a few days shy of his 99th birthday. John, a clever, funny, kind scientist who was also an ace showman with an astoundingly resonant voice, won the 2011 Ig Nobel Prize for public safety, for conducting a series of safety experiments in which he drove an automobile on a major highway while a visor repeatedly flapped down over his face, blinding him. John is on display doing that in this old TV news report:

The photo here shows John delivering his acceptance speech at the Ig Nobel Prize ceremony. The historic helmet is by his side. 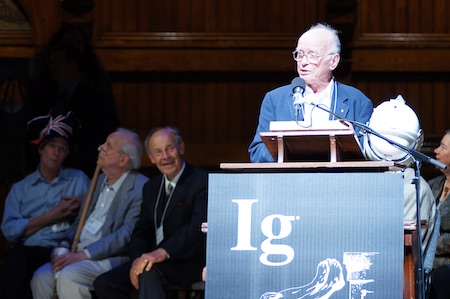 And there was considerably more to John Senders than that one experiment. Dip into the compendium at the John Senders web site. And if you like, read the small essay about John I wrote five years ago, for Beta Boston.

John’s death will in not the slightest impair his clever plan to infect the peoples of the earth with curiosity and a really deep sense of humor.