by E. R. Schulman and E. A. Schulman, Alexandria, Virginia

This year (2019) marks the 150th anniversary of Dmitri Mendeleev publishing the first recognizable periodic table in his paper “Relationship of Elements’ Properties to Their Atomic Weights” (Mendeleev 1869), the 20th anniversary of AIR publishing “How to Write a Scientific Research Report” (Schulman, Cox, and Schulman 1999), and the year before the next United States decennial census. This paper seeks to combine all three in order to answer the often unasked question: Is American last name frequency inversely proportional to terrestrial elemental abundance?

We searched the U.S. Census Bureau’s file of surnames that occurred 100 or more times in the 2010 Census for last names corresponding to the chemical elements and found twelve that did so. Table 1 shows the name and atomic number of each of the elements, the frequency of occurrence in the 2010 U.S. Census, and the elemental abundance in the Earth’s crust for non-gasses and in the Earth’s atmosphere for gasses…. 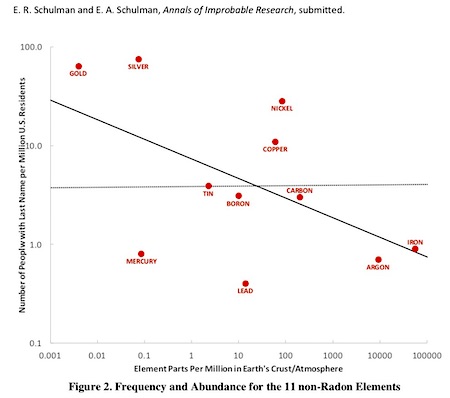 So begins the study. Download the entire thing (it’s fairly short) as a PDF.