– explain a research team from the Department of Plastic, Aesthetic, Hand and Reconstructive Surgery, Hannover Medical School, Germany. In order to help pinpoint the perfect position, they first photographed six healthy (shirtless) men  – then, all traces of their actual NAC positions were removed from the images : 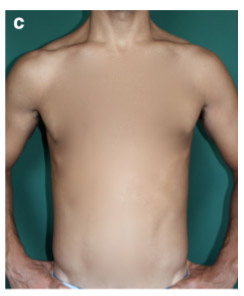 “Images of the selected subjects were transferred to iPhoto# (Apple Inc, Cupertino, CA) and edited by the investigator. Photographs were transformed to black and white to minimize distractions from shadows and contrast changes. Finally, the NACs were erased. Initially, the submammary fold, sternum and umbilicus were preserved. The second examination included the retouching of all contours of the chest and abdominal wall including the umbilicus and pectoral muscle contours. Resulting images did not offer any clues of the previous NAC position.”

The photos were then printed out, and two teams of professional plastic surgeons drew on the images, indicating where they thought the NACs might best be positioned. Taking these positions into account, the research team were able to define a new method – using what they call the Mohrenheim-Estimated-Tangential-Tracking-Line (METT Line).

“Therefore, using the metrics from previous research in combination with the intuitive orientation on landmarks of the male chest wall, we are able to ﬁnd the optimal NAC position in almost every patient.”