The real numbers are the dependable breadwinner of the family, the complete ordered field we all rely on. The complex numbers are a slightly ﬂashier but still respectable younger brother: not ordered, but algebraically complete. The quaternions, being noncommutative, are the eccentric cousin who is shunned at important family gatherings. But the octonions are the crazy old uncle nobody lets out of the attic: they are nonassociative.” [our hyperlinks]

The quote is from professor John C. Baez (Department of Mathematics University of California) who describes octonions in great detail in his paper for arXiv (2001) entitled : The Octonions. 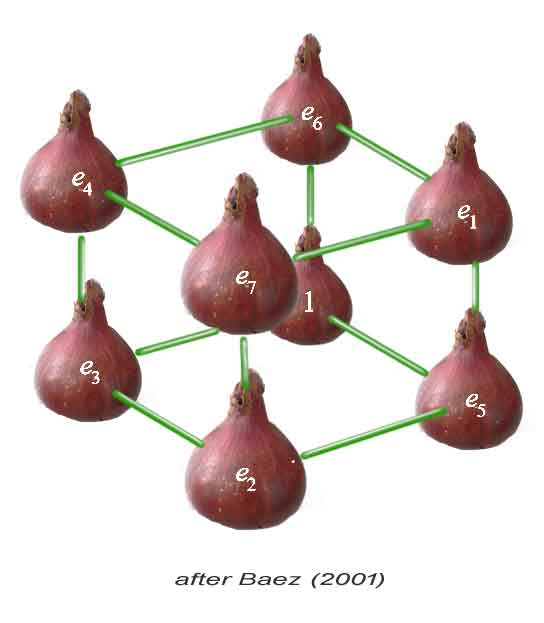 Since they were first unearthed by John T. Graves and Arthur Cayley in 1843, it might be said that octonions have struggled somewhat to find practical applications. But there are some. For a recent example, see : ‘Novel computer algorithm for cough monitoring based on octonions’ currently in press at Respiratory Physiology & Neurobiology. The authors of the paper have developed :

“a new classiﬁcation algorithm based on octonions”

which has, they say :

Also see : A recent essay in Quanta magazine which suggests that new findings (about octonions) are fueling an old suspicion that fundamental particles and forces spring from strange eight-part numbers.

Note: The illustration is after Baez (2001), but with all the nodes replaced by onions.