Erik Peper, co-author of an Ig Nobel Prize-winning book about how to cure ill people by holding one’s hand near them but not touching those ill people, has a new research study of students who did mathematics whilst slumping in their chairs. The new study is: 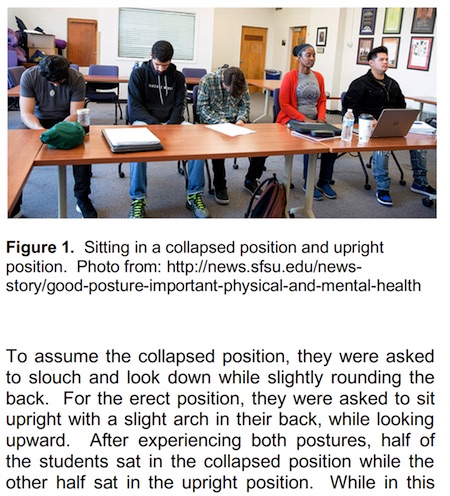 “This study investigates posture on mental math performance.  125 students (M = 23.5 years) participated as part of a class activity. Half the students sat in an erect position while the other half sat in a slouched position and were asked to mentally subtract 7 serially from 964 for 30 seconds. They then reversed the positions before repeating the math subtraction task beginning at 834. They rated the math task difficulty on a scale from 0 (none) to 10 (extreme). The math test was rated significantly more difficult while sitting slouched (M = 6.2) than while sitting erect (M = 4.9) ANOVA [F(1,243) = 17.06, p < 0.001]…. Discussed are processes such as stereotypic threat associated with a ‘defense reaction’ by which posture can affect mental math and inhibit abstract thinking.”

Erik Peper and the Ig Nobel Prize, and the vanished paper

The 1998 Ig Nobel Prize for science education was awarded to Dolores Krieger, Professor Emerita, New York University, for demonstrating the merits of therapeutic touch, a method by which nurses manipulate the energy fields of ailing patients by carefully avoiding physical contact with those patients.

Dolores Kreiger documented her work in a study co-authored with Dr. Peper. That study is “The Therapeutic Touch,” Dolores Krieger, Erik Peper, and Sonia Ancoli, The American Journal of Nursing, vol. 79, no. 4, 1979, pp. 660-662.

The Krieger/Peper/Ancoli paper seems to be absent from the journal’s web site, and is not mentioned in the table of contents of that issue of the American Journal of Nursing. Here is a reproduction of the first page of the article (we do ourselves have a copy of the entire article): 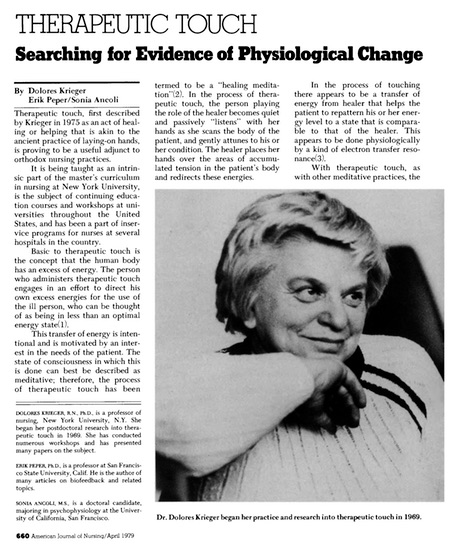