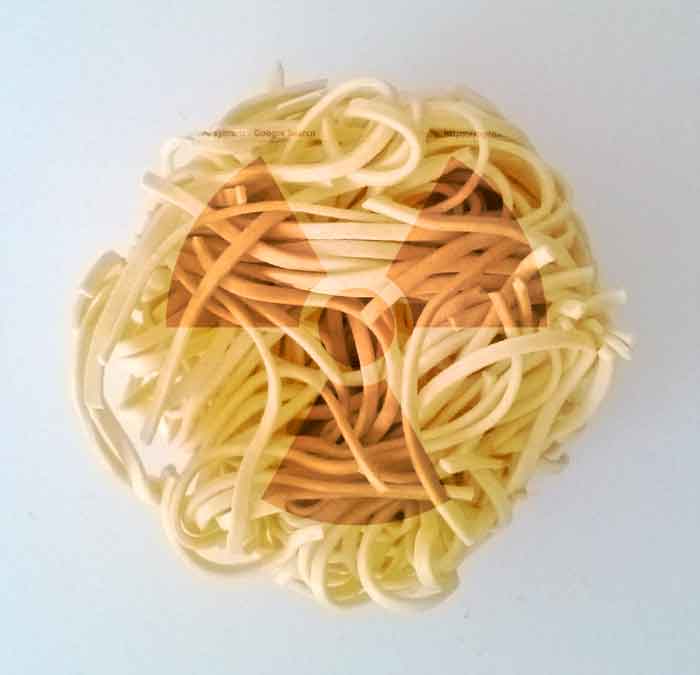 “Radioactivity is invisible, tasteless and not mentioned on food labels” – a phrase that applies, perhaps just as much as with any other food, to instant noodles. Enthusiasts of which might have noticed that radiation levels are rarely, if ever, stated on the packaging. This fact has not escaped the attention of Professor Ali Abid Abojassim at the Physics Dept at the University of Kufa, Faculty of Science, Al-Najaf, Kufa, Najaf, Iraq, who, in 2015, decided to perform some tests on various brands of instant noodles openly for sale in Iraq.

“Thirteen Instant Noodles samples were collected from some supermarkets that available in Iraq Markets. The collection period between December 2014 to February 2015. To ensure a comprehensive and a wide-spread representation, 13 different brands that originated from 5 different countries were selected.”

Fortunately, the results showed that none of the noodle brands exceeded internationally agreed acceptable limits : –

“226Ra, 232Th and 40K have been measured in Instant Noodles samples that sold in Iraqi Markets using gamma-ray spectroscopy. The activity profiles of the radionuclides have clearly showed low activity for all samples under study. Some Radiological Parameters such as the Raeq and the Hin were calculated to assess the radiological hazards from eating of Instant Noodles. All the calculated parameters are lower than the recommended safe level. Thus, the result of this work showed that the natural radioactivity in each available noodles samples brands consumed in the Iraqi markets do not pose any health risks or effect of Radioactivity. But in the long term, accumulation of the radioactivity from some samples under study could lead to health issues.”

Note : The professor has also examined the (radioactive) Radon of Concentrations Measurement in Some Types of Toothpastes Available in the Iraqi Markets (they were also within the limits).