Reporters look back, more or less fondly, in this video, at the most famous exploding whale incident of the 20th century. As the video in this video shows, a dead whale washed up on a beach, and local authorities tried to dispose of the remains by using dynamite. The result was more fervent than they had anticipated:

(Thanks to Ben Henick for bringing this historic video to our attention.)

The disposal technique, with variations, has been used elsewhere, generally on smaller-than-a-whale-yet-still-pretty-large carcasses.

We have discussed, here, “How to blow up a cow (officially),” and also the story of “Deciding not to blow up a cow (officially).” Both of those discussions involve the US Forest Service’s standard procedure as specified in the document “Obliterating Animal Carcasses with Explosives,” by Jim Tour and Mike Knodel, 1995, USDA Forest Service document #9523-2315–MTDC. The document begins by showing how to proceed if there is no great urgency: 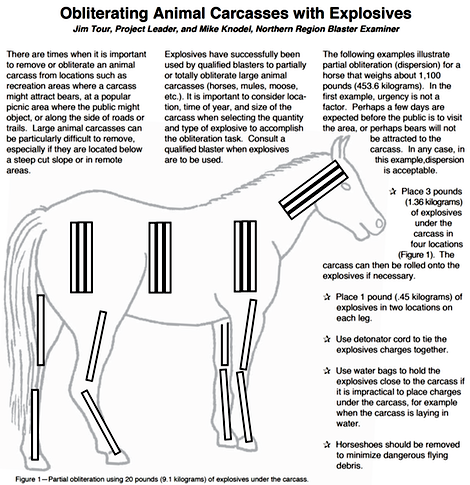 The document then shows how to place the dynamite if the problem must be dealt with quickly: 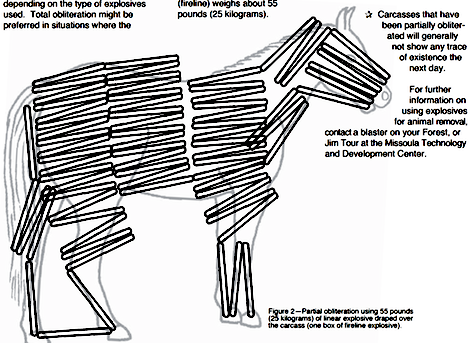 UPDATE (related): “Fire at London’s Hayward Gallery as Rotting Fish Artwork Explodes.” (Thanks to John Simmons and Sally Shelton for bringing this to our attention.)