Attention was recently drawn to the fact that Robert E. Lee had a crease in his right earlobe, and that he died from cardiovascular disease. But Lee was by no means the only historical figure who showed such signs. 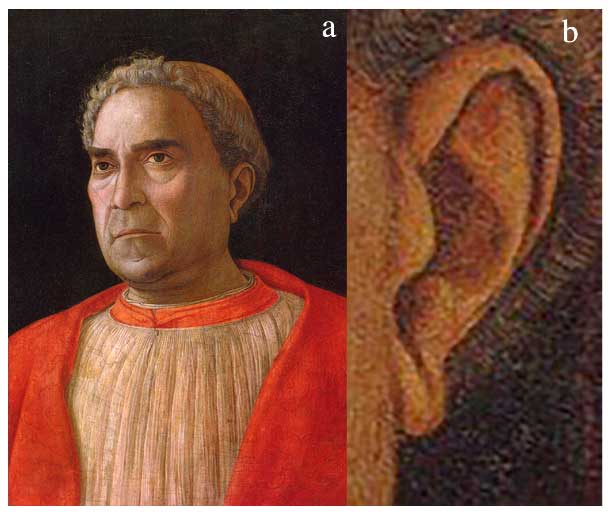 Francesco M. Galassi, Dr. who is a Postdoc assistant in the Paleopathology and Mummy Studies Group at the University of Zurich, reminds us that there are abundant opportunities for paleopathological research in this area. He has recently discovered, for example, that Cardinal Ludovico Trevisan (1401–1465) [pictured] not only had a crease across his auricular lobe, but also :

“[…] the cardinal’s death, which occurred five to six years after the portrait was made, in Rome on 22nd March 1465, might very well have been the result of oedema, once known by the currently obsolete term ‘dropsy’, a common final pathophysiological step of several organ failures such as hepatic and renal, and well known to be associated with cardiovascular disease.”

Bonus assignment [optional] List historical individuals (aside from Robert E. Lee and Cardinal Ludovico Trevisan) for whom there is existing visual evidence of earlobe creases and who are also recorded as having died as a result of cardiovascular problems.