John Trinkaus, who was awarded the 2003 Ig Nobel literature prize, for meticulously collecting data and publishing more than 80 detailed academic reports about things that annoyed him, died. His family notified us today.

John (who enjoyed jokingly referring to himself as “Trinkaus”) was one of New York’s overlooked treasures. We became friends after he won his Ig Nobel Prize. Trinkaus loved to explain that he did all those studies for the satisfaction of doing them—not to amass academic credit. He published the first of those reports, he said, after he had gotten tenure. He was a professor at the Zicklin School of Business, in New York City.

One of the most unusual things about Trinkaus was that he, mostly, simply counted how many times the annoying things happened. Unlike many academics, Trinkaus did not search for imaginative theories about the things he counted. Here’s a photo of Trinkaus (center) accepting his Ig Nobel Prize (a plexiglas cube containing a nanogram of gold) from Nobel laureate Wolfgang Ketterle. Ig Nobel minordomo Julia Lunetta is at left: 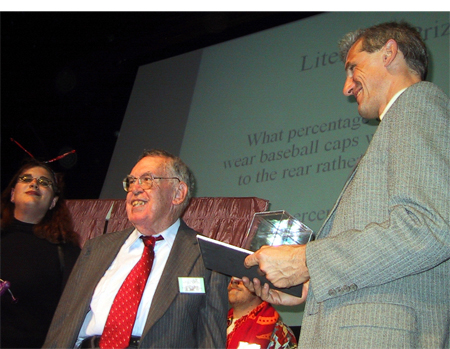 Here are a few of the studies of things that annoyed John Trinkaus:

Eighty-six of of Trinkaus’s publications are listed in “Trinkaus—An Informal Look,” which appeared in the Annals of Improbable Research, vol. 9, no. 3 (the special Everything issue), May/Jun 2003.

You can watch video of Trinkaus receiving the Ig Nobel Prize, and delivering his acceptance speech.

Trinkaus did some of his finest work after winning his Ig Nobel Prize. The most celebrated was a series of studies in which he documented that most children seemed indifferent about visiting Santa Claus at a shopping mall — and that the kids’ parents, unlike the kids, were excited. The New York Times gave a very New York Times appreciation of this research: “There Is No Joy in Toyville; Mighty Santa’s Striking Out.”

To the best of our knowledge, no academic has followed Trinkaus’s lead in carefully, relentlessly documenting things that annoy them, tallying exactly how frequently those things occur.

If there is a heaven, it will now learn exactly how many angels can dance on the head of a pin.

BONUS: The year after Trinkaus was awarded his Ig Nobel Prize, he returned to the ceremony and took part in that year’s mini-opera. You can watch him dancing the can-can as part of that opera’s final song, about the coffee diet.

BONUS: In 2004, Fortune magazine asked me to write about Trinkaus. I began that article with this question: “Does one man count for nothing?”

UPDATE: His obituary, in Newsday.