“Theobromine: A Safe and Effective Alternative for Fluoride in Dentifrices,” Tetsuo Nakamoto, Alexander U. Falster, and William B. Simmons, Jr., Journal of Caffeine Research, vol. 6, no. 1, February 2016, pp. 1-9. The authors, at  Louisiana State University Health Sciences Center and at the Maine Mineral and Gem Museum, Bethel, Maine, explain: 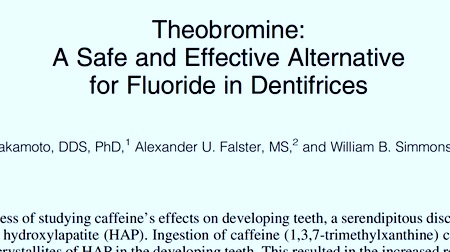 “During the process of studying caffeine’s effects on developing teeth, a serendipitous discovery was made…. [We conducted studies in rats….] It is also well documented that young children who brush their teeth often ingest fluoride-containing dentifrices. Based upon our comparative study between fluoride and theobromine [a major constituent of chocolate, and also of tea], theobromine is a better alternative than fluoride. We believe that theobromine can be used as an ingredient of dentifrices and even if swallowed accidentally, there are no adverse effects.”

This and other bits of improbable research news litter the October issue of mini-AIR. mini-AIR is the wee, free monthly supplement to the magnificent magazine Annals of Improbable Research.