Dr.  Marisa López-Teijón, leader of the team that won the 2017 Ig Nobel Obstetrics Prize — for showing that a developing human fetus responds more strongly to music that is played electromechanically inside the mother’s vagina than to music that is played electromechanically on the mother’s belly — describes what the team experienced during Ig Nobel week [this is an auto-translation into English; the original Spanish version, with additional photos, is on the team’s blog]: 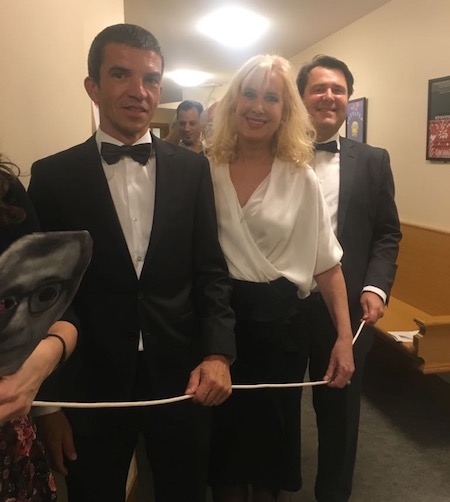 I have just arrived from Boston and I want to share with you my joy for this award. It is an important recognition by prestigious universities and makes me especially excited because they try to bring science to everyone in an easy and fun way.

They treated us as if we were heroes of comics of scientific adventures, with respect and constant amusement. For example, before the Harvard ceremony we were shown the facilities but we were lined up with string, full of excitement and laughter.

To walk around the Massachusetts Institute of Technology they put stickers that put “IG NOBEL SPECIMEN” and the teachers and students did not stop asking us questions and asking for practical examples. The Korean physicist who studies fluid dynamics danced back imitating Michael Jackson carrying a cup of coffee in his hand (so do not spill !!).

The award-winning dinner was in the house of one of the teachers, absolutely endearing, even the soprano of the gala sang the happy birthday to the English researcher who studies the ears.

Some of us have the most developed sense of humor and all of this amuses us but others are very serious and really made an effort. But thanks to that the global impact on the media is amazing.