“Charles Darwin considered costly traits that could not be accounted for by survival advantage, such as peacock tails, problematic to his theory of evolution by natural selection. He later realized that these features conferred reproductive advantage in the acquisition of mating partners.” 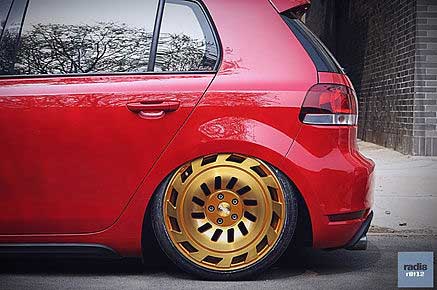 Could this peacock tail insight be applied to humans? Specifically male humans? More precisely to male humans who are students? To be exact, to male human students who buy expensive fancy wheels for their cars? So wondered Daniel J. Kruger (School of Public Health, University of Michigan) and Jessica S. Kruger (School of Population Health, University of Toledo) who performed the first experimental study (of its kind) to determine whether visually conspicuous vehicle modifications influence perceptions of male owner’s reproductive strategy and attractiveness.

The results of the survey, which showed the students photos of cars with upgraded wheels, allowed conclusions to be drawn – and published in a Professional Article for EvoS : The Journal of the Evolutionary Studies Consortium 2016, NEEPS Special Issue pp. 1-12 and which can be read in full here : Visually conspicuous vehicle modifications influence perceptions of male owner’s reproductive strategy and attractiveness

“Radi8 Wheels was [sic] made for those who stand out of the crowd, for those who want to try something different. We devote passion into designing each wheel with its own unique personality. From the ‘Charming Jerk’ wheel to the ‘Mr Drama Queen’ gives your ride that personal touch.”