The 2017 Ig Nobel Prize ceremony will include the premiere of a new mini-opera: “The Incompetence Opera.”

It’s a musical encounter with the Peter Principle and the Dunning-Kruger Effect. It’s about how and why incompetent people rise to the top — and what that implies for everybody.

The opera has three acts, which will intersperse with the awarding of this year’s ten new Ig Nobel Prizes, and with other goings-on. (The entire libretto is included in this year’s IgBill, the printed program distributed at the ceremony. You can download a copy now, in PDF form.)

WHEN AND WHERE: You can watch the opera premiere — and the entire Ig Nobel Prize ceremony — on the live webcast on Thursday evening, September 14. (A few tickets are still available, if you’d like to attend the ceremony at Sanders Theatre on the Harvard campus.) 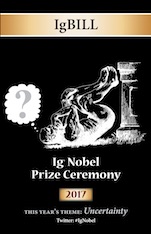 BACKGROUND (the principles and the prizes): The Peter Principle and the Dunning-Kruger Effect have each led to an Ig Nobel Prize.

ALSO SO: So… you may have noticed that many people begin almost everything they say by saying the word “so.”  So the new opera — “The Incompetence Opera” — plays with “so”, too. So the chorus sings, repeatedly, in act 2:

So, why do so many people begin each sentence by saying “So…”?

So why should we pay attention to anything, just ’cause they say so?

BACKGROUND (the operas): Every Ig Nobel Prize Ceremony since 1996 has included a new mini-opera, performed by professional opera singers (with Nobel Laureates acting in supporting roles). These mini-operas honor the tradition of the classic Bugs Bunny cartoons “What’s Opera, Doc?” and “Rabbit of Seville“— each mini-opera is a pasticcio that marries a brand new story & words to beloved old music (from operas, popular songs, etc.). Here’s a list of the other Ig Nobel mini-operas: