“The medial [sic] appeal of table tennis seems to go down in terms of TV hours, at least outside Asia. One of the reasons is the fact that the speed of the game is nowadays so high that it is very hard for spectators to follow the balls.”

So, in terms of slowing down the game (in order to increase its appeal for TV viewers) what might be done? In 2013, a team from the Institute of Physics, and the Institute of Community Medicine at Ernst-Moritz-Arndt University, Greifswald, along with the Faculty of Informatics and Electrical Engineering, University Rostock, Germany, decided to use a computational modeling approach to provide answers. 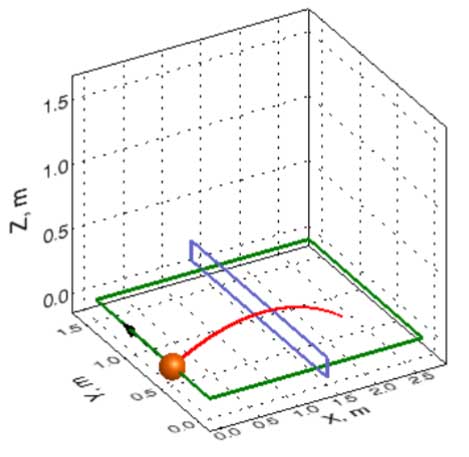 An Euler solver was used, because its algorithmic simplicity allowed an easy transfer onto the GPU with CUDA. A commonly used Runge-Kutta algorithm was not chosen, because it has larger computational costs. A fourth order Runge Kutta approach needs to calculate four times the forces, which slows down the code performance in our case compared to the simple Euler method. This was not compensated by the larger time step possible with the Runge-Kutta method compared to the Euler method. The dependence of the aero dynamic forces on the velocity also does not allow the use of a Verlet algorithm. Therefore, we decided to stay with the Euler method.”

The results revealed not one, but two possible methodologies which could be practical solutions – if adopted by the International Table Tennis Federation (ITTF).

“A larger ball of 44 mm with small weight is one option for suppressing high velocities, resulting also in a reduction of the influence of spinning. As an alternative option an increase of the net height is possible.”

See:’ Computer simulations of table tennis ball trajectories for studies of the influence of ball size and net height ‘ in the International Journal of Computer Science in Sport, volume 12/2013/edition 2.

Bonus Task [optional] Suggest other methods that might be employed to slow down the game.

Note: The illustration is an interesting candidate for the Necker cube illusion. (stare at it for a while and it will probably flip)