Is your boss easily distracted? Impulsive? With a diminishing IQ? It’s possible the he/she might be hosting the mind-altering parasite Toxoplasma gondii. Attention is drawn to this possibility in the latest online issue of the journal Academy of Management Perspectives. 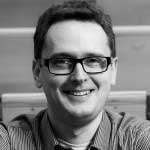 An investigation by Petr Houdek, [pictured right] who is a director at the CEBEX experimental economics lab in Prague, outlines the possibilities, noting that it’s estimated that the parasite afflicts 30 to 40 percent of the worldwide human population – and that they may be chronically infected with T. gondii, which is known to be able to covertly alter cognition and personal characteristics in infected individuals.

“The article summarizes the parasite’s physiological mechanisms of affecting the host, important behavioral effects of the infection in humans and speculates on the possible impacts on skills and careers of employees and managers, organizational dynamics, inter-cultural management, and gender work roles.”

The author concludes by suggesting that :

“[…] Toxoplasma-positive individuals have specific personality characteristics compared to the non-infected population, and that such differences could be caused by physiological manipulation by the parasite, though in some cases there is still a probability that certain groups of people have a higher likelihood of getting infected. Toxoplasma-positive individuals have slower reaction times, they are more easily distracted and their working memory is worse. Toxoplasma may decrease an individual’s life satisfaction. Infected people more often believe that their instinctive behavior under imminent anger is rather slow and passive, and that some people have the power to impose their will on others. They also believe that when they are attacked, they stop fighting because their own sub-consciousness betrays them. Infected men have higher levels of testosterone and their physical appearance is portrayed as more masculine and dominant.”

See: Puppet Master: Possible Influence of Parasite Toxoplasma gondii on Managers and Employees which is currently awaiting publication in Academy of Management Perspectives.

Question [optional]: Could the same line of enquiry also be gainfully employed in political and/or leadership studies? [give current speculative examples where possible]

Also see: The work of Jaroslav Flegr, Jan Havlíček and Jitka Hanušova-Lindova, and to David Hanauer, Naren Ramakrishnan, Lisa Seyfried, who jointly shared the 2014 Ig Nobel Public Health Prize for investigating whether it is mentally hazardous for a human being to own a cat. (in the sense that cats can readily transmit the parasite to humans).