Boxer crabs almost constantly hold the fate — and the bodies — of sea anemones in their hands, so to speak. In their claws, really. There’s a new paper about this:

“Crabs of the genus Lybia have the remarkable habit of holding a sea anemone in each of their claws. This partnership appears to be obligate, at least on the part of the crab. The present study focuses on Lybia leptochelis from the Red Sea holding anemones of the genus Alicia (family Aliciidae). These anemones have not been found free living, only in association with L. leptochelis. In an attempt to understand how the crabs acquire them, we conducted a series of behavioral experiments and molecular analyses. Laboratory observations showed that the removal of one anemone from a crab induces a “splitting” behavior, whereby the crab tears the remaining anemone into two similar parts, resulting in a complete anemone in each claw after regeneration.”

And that’s not all. There’s theft. There’s warfare. There’s all sorts of stuff. Details are in the study. 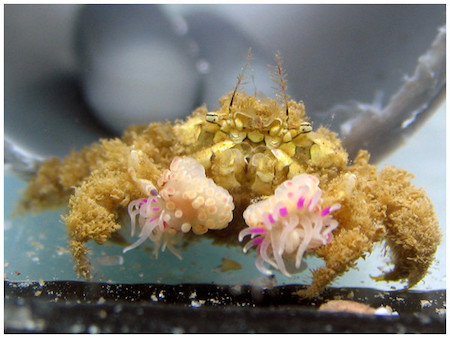 Mary Bates, writing for National Geographic, has further details, too, and some video.