You will never hear about most of the flood of research that’s done, worldwide. Partly, that’s because there is so very, very much of it. 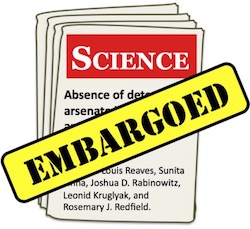 But partly, it’s because the custom of “embargoing” a small number of studies ends up focusing most press attention — and so most public attention — on a teeny tiny, itsy bitsy fraction of what’s out there.

Ivan Oransky tells how this works, and how it came to be, in an article in Vox: “Why science news embargoes are bad for the public“. Here’s part of that:

… But it’s clear that a lot of the power of embargoes would go away if journalists stopped believing they had to publish a story or post a blog the minute a new study came out. Sure, I get the value of a news peg. I used to run a wire service, Reuters Health, that covers health. But it warps the public’s understanding of how science works.

One new study can’t overturn the consensus in the field. And in many cases, the newest study is just the one most likely to be disproven in the future. Readers can often learn more from the history of a scientific question than they can from just the latest stab at answering that question.

But because reporters feel the need to make every finding sound important, embargoes are responsible in some large part, for example, for the weekly seesaw of “coffee is good for you, coffee is bad for you” news coverage with which we’ve all become too familiar….

BONUS: If you want to see some research that’s way outside the it-must-be-important-because-it’s-embargoed research, dip into the Annals of Improbable Research from time to time.

NEXT POST: Did a British monk flap his wings 1000 years ago?